Sea Turtles and the Isle of Palms 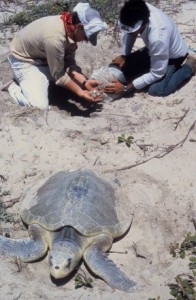 We are lucky to have active sea turtle nesting grounds on South Carolina’s coast. Of the seven species of sea turtles found worldwide, six species are endangered or critically endangered, and four species come to South Carolina to nest: loggerheads, Kemp’s ridleys, green sea turtles and leatherbacks. Their nesting season runs from May through August. After a sea turtle lays her eggs, the incubating period is about 60 days, so hatchings typically occur from July through October. The South Carolina Department of Natural Resources and numerous conservation groups monitor nesting activities and sea turtle strandings along the SC coast. Injured turtles are taken to the SC Aquarium in Charleston, for rehabilitation at the Sea Turtle Hospital there.

Sea turtles are important for several reasons. Perhaps we can be most grateful for their appetite for box jellyfish. Box jellyfish, also known as sea wasps, are found in South Carolina waters during the warm swimming season, and they have a powerful sting. Sea turtles are immune to this sting and dine on the jellyfish, keeping their populations down. This of course is good news for those who enjoy swimming in the ocean. Sea turtles also graze on sea grass, which provides important breeding grounds for other marine life. Without the maintenance sea turtles provide, the sea grass would become overgrown and could die. Sea turtles also help to keep sand dune vegetation healthy. The average sea turtle lays four to five nests per season. Not all of the eggs will hatch, and the ones that are not viable break down back into the earth, providing an important nutrient source for dune vegetation, which keeps erosion in check.

When rehabilitated sea turtles are released back into the ocean, the public is invited; this helps to raise awareness about the endangered creatures, and there is usually a large turnout.