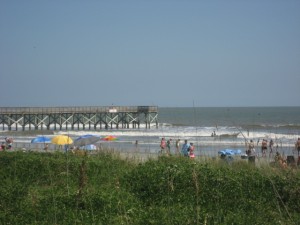 By Lee Keadle, via Wikimedia Commons

While single-family real estate on the Isle of Palms had an excellent June, overall prices are slightly lower than what we saw in the first half of 2012. However, the number of homes sold so far this year has increased over last year by more than 25%. Homes on the Isle of Palms are also selling faster than they were last year, by about 15%, or 30 days.

Folks looking for attached real estate on the island have about 90 active properties from which to choose — or perhaps we should say folks interested in selling their attached real estate have about 90 active listings with which to compete. The average price is up 20.5% to more than $470,000, and median price is up nearly 50% to $441,000. Condos and townhomes are spending an average of 237 days on the market, up about 18% from last year. Sales have jumped almost 14% from last year, with 41 attached properties sold so far in 2013.

If you’d like more information on the Isle of Palms real estate market and some insight into what these numbers mean in the short and long term, check with Bob Brennaman. Having helped many satisfied clients with IOP transactions, he is happy to share his expertise with buyers and sellers.