Cycling from SC Upstate to Lowcountry 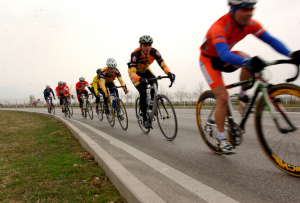 The drive from Spartanburg, SC, to the Isle of Palms may take you three and a half or four hours; you’d hop into your car and onto Interstate 26 in Upstate South Carolina and drive about 200 miles southeast until the highway’s diagonal route through the state ends in the Lowcountry. From there, you are just short shot away from the waves and the beach on the Isle of Palms. But what if you were on a bicycle? How long would it take you to make it — would you ever make it? What route would you take?

On Friday, October 21, 2011, a group of 15 cyclists — hosted by the Spartanburg Freewheelers — did just that. They did not take the interstate, opting instead for 237 miles of quieter scenic South Carolina back roads. They set out in the predawn hours at 4:30 a.m. and made it to the Isle of Palms by 8:30 that same evening.

Meticulous planning on the part of the Freewheeleers resulted in a safe and fun route to the beach house at the Isle of Palms. The group enjoyed sunny skies and 75-degree weather throughout their ride, and all 15 riders finished the trek. What a ride it must have been — there is so much to see in South Carolina — experiencing the state while traveling 20 miles per hour in the open air is probably an incredible experience.

Followed by two support vehicles that carried food and supplies, the group stopped every 25 miles or so. Their route carried them through the hills of Spartanburg into Chester, SC, where they stopped for breakfast at McDonalds. The next leg of the trip carried them across the Catawba River near tiny Great Falls and through the hills of Lake Wateree in Kershaw County; they made it to historic Camden, SC, in time for a picnic lunch at the Revolutionary War Park there.

The group pressed on through Sumter and Manning, SC, on their way to Moncks Corner and the Francis Marion National Forest via Highway 52. The cyclists reached the forest in the late afternoon, and just like any long car trip, they began to feel the monotony of being on the road for hours. They rode 40 or so miles through the national forest, much of the ride in the dark. As you might image, taking a wrong turn at this point while peddling through the dark forest on a bicycle is not really an option.

Even though it was dark, the riders could tell they were getting close to the Isle of Palms — just like on any trip to the beach, the smell of salt and pluff mud gave them a hint that the beach was nearby. When the cyclists finally arrived at their Isle of Palms beach house, they were greeted by children waving palm fronds — what could be more Lowcountry?

For anyone in the Charleston area interested in cycling a little closer to home, check out http://www.coastalcyclists.com/, a bicycling club started in Charleston in 1972. The organization hosts weekly (and daily) club rides throughout the Lowcountry, including in Awnedaw, Summerville, Goose Creek, James Island, West Ashley, Kiawah Island, and John’s Island. There are road and off-road rides of all lengths and paces.